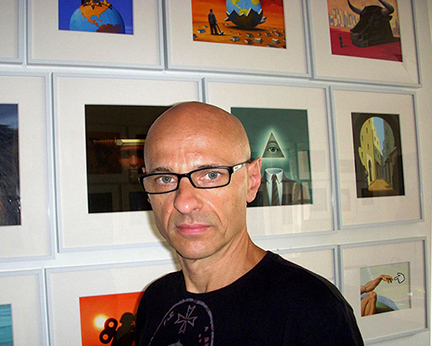 Marian Christopher Zacharow was born in Zamosc, Poland in 1954. He studied painting at the Academy of Fine Art in Krakow where he graduated in 1979. In 1981, Christopher left Poland for the United States and took up permanent residence in New York, NY.

Christopher has established himself as a painter and notable illustrator. Among his various achievements, his illustrations have been featured in various well known magazines, including Time, The New York Times, Business Week, U.S. News and World Report, Newsweek, The Atlantic Monthly and Psychology Today. He has also created book cover art for publishers like Franklin Library, Viking Penguin, William Morrow, Harper Collins, Simon & Schuster, Inc. Random House, among others.

Since 1997, Christopher has been teaching painting at New York’s well-known Cooper Union, one of the nation's oldest institutions of higher learning dedicated exclusively to preparing students for the professions of art, architecture and engineering, and Illustration at the Parsons School of Design from 2000 to 2003. Since 2007, he is a Visiting Assistant Professor, Adjunct at Pratt Institute, a leader in higher education dedicated to preparing students for successful careers in art, design, architecture among others, that enjoys international renown.

He has received many awards for his work including the Silver Medal from The Society of Illustrators of New York in 1986.

Marian Christopher Zacharow has had 10 solo exhibitions in New York since 1983 and has participated in numerous group exhibitions in the U.S., Canada and Europe.

About Keith Haring
Keith Allen Haring was an artist whose work responded to the street culture of the 1...
Formal & Modern Mix
In the decor of this room one might expect a painting or image that is thought of as classic, such a...

Our website uses cookies to make your browsing experience better. By using our site you agree to our use of cookies. Learn More I Agree
× What Are Cookies As is common practice with almost all professional websites this site uses cookies, which are tiny files that are downloaded to your computer, to improve your experience. This page describes what information they gather, how we use it and why we sometimes need to store these cookies. We will also share how you can prevent these cookies from being stored however this may downgrade or 'break' certain elements of the sites functionality. For more general information on cookies see the Wikipedia article on HTTP Cookies. How We Use Cookies We use cookies for a variety of reasons detailed below. Unfortunately in most cases there are no industry standard options for disabling cookies without completely disabling the functionality and features they add to this site. It is recommended that you leave on all cookies if you are not sure whether you need them or not in case they are used to provide a service that you use. Disabling Cookies You can prevent the setting of cookies by adjusting the settings on your browser (see your browser Help for how to do this). Be aware that disabling cookies will affect the functionality of this and many other websites that you visit. Disabling cookies will usually result in also disabling certain functionality and features of the this site. Therefore it is recommended that you do not disable cookies. The Cookies We Set
Account related cookies If you create an account with us then we will use cookies for the management of the signup process and general administration. These cookies will usually be deleted when you log out however in some cases they may remain afterwards to remember your site preferences when logged out. Login related cookies We use cookies when you are logged in so that we can remember this fact. This prevents you from having to log in every single time you visit a new page. These cookies are typically removed or cleared when you log out to ensure that you can only access restricted features and areas when logged in. Form related cookies When you submit data to through a form such as those found on contact pages or comment forms cookies may be set to remember your user details for future correspondence. Site preference cookies In order to provide you with a great experience on this site we provide the functionality to set your preferences for how this site runs when you use it. In order to remember your preferences we need to set cookies so that this information can be called whenever you interact with a page is affected by your preferences.
Third Party Cookies In some special cases we also use cookies provided by trusted third parties. The following section details which third party cookies you might encounter through this site.
This site uses Google Analytics which is one of the most widespread and trusted analytics solution on the web for helping us to understand how you use the site and ways that we can improve your experience. These cookies may track things such as how long you spend on the site and the pages that you visit so we can continue to produce engaging content. For more information on Google Analytics cookies, see the official Google Analytics page. We also use social media buttons and/or plugins on this site that allow you to connect with social network in various ways. For these to work, the social networks may set cookies through our site which may be used to enhance your profile on their site, or contribute to other purposes outlined in their respective privacy policies.