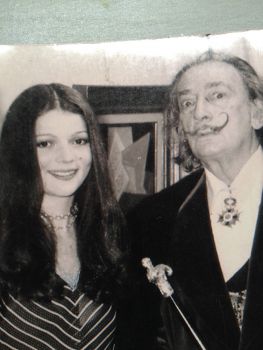 Naomi was born in Bulgaria and was raised in Sao Paulo, Brazil. Educated in a British school, she later studied interior architecture at the Italian Institute of Arts & Architecture.

In 1970, Naomi moved to New York, NY where she lived for the next seven years. She worked at the United Nations until 1973. Thereafter, she was admitted at the famous Wildenstein Art Gallery, with an additional year at Sotheby’s Parke Bernet.

She married in 1977 and lived in Argentina. She gave birth to her son, David, in Brazil. After a painful divorce, she and her son established themselves in Israel where she worked in the international department of a large bank for fourteen years.

In 1998, with the loss of her mother, she started a painting therapy course, which gave way to her artistic talents, which she continued to develop. The result is that she became a self-taught, sophisticated artist. Searching for challenges, she moved to Florence, Italy in 2000 for a period of 7 months.

Her international journeys led her also to visit India, among other countries in Europe, such as France, Spain, and others.

Today, she keeps painting diligently on her own, receiving guidance from a few well-known artists. She counted as a dear friend, the late, famous painter, Salvador Dali (with whom she is pictured).

ARTIST’S STATEMENT: This Versus That

I believe that in essence everything on this planet is connected. Links! Be it versus animate/inanimate, touchable/untouchable, visible/invisible, finite to infinite...Thus figurative versus abstract.

The ‘art’ of the artist is his consciousness developed slowly and painstakingly with many mistakes en route. I embrace the thought that the famous painter, Robert Motherwell, when after he came in touch with a great moral issue that would drive his work for years, he expressed that it was the realization “that the world could, after all, regress.”

When I was 5 and 6 years old, my parents were stunned with my artistic talents in copying the masters such as Lautrec, Degas, Boucher and Fragonard.

Many years later, the first vehicle I used creatively was the camera to photograph people and the expressions and interiors of my daily surroundings, thus conveying my interpretation to the canvas.

In 2008, the ‘calling’ for abstract expression was strong. I had to struggle with the question of whether it was sporadic or planned due to prompting from within.

Having the knowledge of the old and contemporary masters, experiencing rich moments with Dali and his entourage and acquiring a taste for Rothko, Motherwell, Franz Kline, to name a few, I do not allow myself to be influenced directly by any artist…I need the freedom to be!

About Keith Haring
Keith Allen Haring was an artist whose work responded to the street culture of the 1...
Formal & Modern Mix
In the decor of this room one might expect a painting or image that is thought of as classic, such a...

Our website uses cookies to make your browsing experience better. By using our site you agree to our use of cookies. Learn More I Agree
× What Are Cookies As is common practice with almost all professional websites this site uses cookies, which are tiny files that are downloaded to your computer, to improve your experience. This page describes what information they gather, how we use it and why we sometimes need to store these cookies. We will also share how you can prevent these cookies from being stored however this may downgrade or 'break' certain elements of the sites functionality. For more general information on cookies see the Wikipedia article on HTTP Cookies. How We Use Cookies We use cookies for a variety of reasons detailed below. Unfortunately in most cases there are no industry standard options for disabling cookies without completely disabling the functionality and features they add to this site. It is recommended that you leave on all cookies if you are not sure whether you need them or not in case they are used to provide a service that you use. Disabling Cookies You can prevent the setting of cookies by adjusting the settings on your browser (see your browser Help for how to do this). Be aware that disabling cookies will affect the functionality of this and many other websites that you visit. Disabling cookies will usually result in also disabling certain functionality and features of the this site. Therefore it is recommended that you do not disable cookies. The Cookies We Set
Account related cookies If you create an account with us then we will use cookies for the management of the signup process and general administration. These cookies will usually be deleted when you log out however in some cases they may remain afterwards to remember your site preferences when logged out. Login related cookies We use cookies when you are logged in so that we can remember this fact. This prevents you from having to log in every single time you visit a new page. These cookies are typically removed or cleared when you log out to ensure that you can only access restricted features and areas when logged in. Form related cookies When you submit data to through a form such as those found on contact pages or comment forms cookies may be set to remember your user details for future correspondence. Site preference cookies In order to provide you with a great experience on this site we provide the functionality to set your preferences for how this site runs when you use it. In order to remember your preferences we need to set cookies so that this information can be called whenever you interact with a page is affected by your preferences.
Third Party Cookies In some special cases we also use cookies provided by trusted third parties. The following section details which third party cookies you might encounter through this site.
This site uses Google Analytics which is one of the most widespread and trusted analytics solution on the web for helping us to understand how you use the site and ways that we can improve your experience. These cookies may track things such as how long you spend on the site and the pages that you visit so we can continue to produce engaging content. For more information on Google Analytics cookies, see the official Google Analytics page. We also use social media buttons and/or plugins on this site that allow you to connect with social network in various ways. For these to work, the social networks may set cookies through our site which may be used to enhance your profile on their site, or contribute to other purposes outlined in their respective privacy policies.